Burstcoin mining is the foundation for adding blocks to the Burstcoin blockchain.  There are two distinct processes in Burstcoin mining, a preparatory stage referred to as plotting and a processing stage referred to as mining.  It is this unique division which differentiates Burstcoin’s proof-of-capacity consensus algorithm from its functional counterpart, the proof-of-work consensus algorithm, and earns Burstcoin the designation of “environmentally friendly”.

*Burstcoin employs a sophisticated and decentralized API network to verify and records transactions within its distributed and immutable ledger.

Plotting software pre-computes and stores all of the information necessary for forging Burstcoin blocks, including what is referred to as a deadline.  While there are multiple operations at work such as division and string operations, the most notable calculations are based on the Shabal-256 cryptographic hash function.  Shabal-256 is relatively slow and heavy when compared to other functions such as SHA256.  It was specifically selected for this characteristic which slows the rate of plot file creation while remaining fast enough for the live verification used in Burstcoin.  Mining software retrieves these hashes to find values that can be used to forge blocks.

Plot files are bound to Burstcoin account IDs so it is impossible for different account IDs to generate identical plot files.  Using the same account ID, plot files can be created on one computer and then transferred to be mined by a computer with a slower CPU.  When using GPU capable plotting software, it is recommended that the GPU be reserved exclusively for plotting for the duration of the plotting session in order to avoid creating corrupted plot files.  This is a general rule as some plotting software may include innovations that prevent this.

Engraver, an easy to use program, can be found in the Burstcoin software library.  There are many other plotting programs with varying features, speed, and ease of use.

TurboPlotter9000 is another good option.

A solo miner benefits only from those plot files which are specifically bound to their account.  If a solo miner submits the best deadline to the network, they alone will be credited with the entire block reward and 100% of the transaction fees associated with that block.  Because the probability for any individual winning a block is low, consistent success with solo mining requires a large number of plot files.  With the current size of the network, successful solo mining requires multiple terabytes of storage capacity.  It is not unusual for a small miner to choose solo mining in order to further decentralize the network.  In this case, however, profit is not the primary objective.

Pool mining is the alternative to solo mining.  With Burstcoin pool mining, individual capacity is contributed to an independent pool operation and the mining revenue that is earned cooperatively is shared in accordance with the pool’s reward distribution policies (generally proportional).  Pool mining is preferred by most small capacity miners because it provides a stream of smaller but more regular payments.  Anyone with the requisite technical expertise can operate a mining pool using software developed by the Burstcoin community.

Reward assignment is a transaction that notifies the network that all block rewards attributed to your plot files are to be assigned to another account.  This is the mechanism that allows a pool to receive the block rewards that it distributes to its participants.  Reward assignment grants permission for the blocks that are forged using the deadlines that you submit to be signed by the account that belongs to the pool.

In the Phoenix wallet, the reward assignment transaction is found in the upper left corner in a drop down menu.

In the BRS software, it is found behind the gear icon in the upper right hand corner.

After selecting “Reward Assignment”, enter the recipient account address in Reed Solomon format, the minimum transaction fee (.00735), your passphrase, and click on “Set Reward Recipient”.  Reward recipient transactions become effective after four confirmations, so it takes an average of 15 minutes to become effective on the blockchain.

If you do not have the amount necessary to cover the minimum transaction fee, consider solo mining for a few days.  This is the default configuration and no fee is required.  If you operate a full node during this time, you can receive an NDS-A award which can be used for the reward assignment transaction fee.  This award is paid daily and is a good way to supplement your mining revenue.  If you cannot operate a full node, many pool operators will provide the necessary amount through a faucet or forum that they maintain for their members.  Additional options include visiting a Burstcoin community faucet or requesting the amount needed in a Burstcoin forum.  The recommended forum for this purpose is Burstcoin Discord.  Requests for the amount needed are usual and welcomed.

Some pools have a free option that allows you to set your reward assignment directly on their website.  This involves entering your passphrase into an online form.  It is important to remember that after an account’s passphrase has been entered into an online form, it can never again be considered secure.  For collecting mining proceeds, this may not be a problem.  Just remember not to use the account in the future for any large amounts.

Note:  It is possible to set the reward recipient directly using the API.  However, this method is technical and mostly used in software development.

For illustrative purposes, the following unofficial selection of common Burstcoin mining distribution methods is provided.  Each is paired with a suggest mining capacity:

Please note:  Distribution methods are decentralized and set solely by individual pool operators.  Most pool operators charge a small fee that is not addressed by this schedule.  Pool operators may also set their payment schedules and minimum payouts independently.  With the recent introduction of multi-out transactions, pools have additional flexibility.  Some have elected to pay rewards daily.

Effective plot size is the parameter used to determine each miner’s share of a pool’s mining revenue.  The method to determine this statistic is set independently by each pool operator, but it is commonly calculated based on the best deadlines submitted by a miner over a period covering 360 blocks.  For a new miner, the effective plot size typically starts at zero and rises to reflect full capacity over the course of 24 hours.  Because effective plot size is statistically generated, it will usually oscillate above and below the actual physical size of a plot.  This calculation can be optimized by limiting the maximum deadline to be submitted.  Miners are advised to read and understand the method used by their selected pool operator in order to optimize their mining performance and revenue.

A full schedule of block rewards is located at the end of this document.

The process of mining and forging blocks:

Note that transactions are not stored within the block, but separately.

Pools often set a maximum deadline limit and deadlines that exceed this limit will not be included for calculating historic share.

Hash functions reduce text or data to a 64-character string of characters.  An original text, regardless of length or content, will produce the same string of 64 characters.  Even the smallest change will result in a completely different string of characters.  This has many applications, one being that a program can be checked for alterations by comparing the hash it produces with a hash produced from a version that is known to be good, or at least the original.  If a program with malicious code is presented as the original software, but the hash that it produces is different, this is evidence that the software has been altered.

With Burstcoin’s application of cryptology, each block contains the hash of the previous block so that each block in the chain of blocks can be verified as legitimate.  If an earlier block is altered, the hash for every subsequent block would also have to be changed, a task that would take billions of years due to Burstcoin’s strong cryptology.  New blocks are added approximately every four minutes and this short window of opportunity precludes such a lengthy task.  Herein lies the security of the Burstcoin blockchain.

Unlike Bitcoin, the problem is not solved by random guessing, but by reading through plots that contain the results of pre-computed hash functions, evaluating each to determine a deadline, the amount of time it would take for a plot to return an answer to the puzzle.  All submitted deadlines submitted are compared and the account submitting the shortest valid deadline is authorized to signs the block and receive the block reward.

Newly-created blocks are distributed to the network by the account that creates them.

Following is the terminology necessary for understanding the plot file creation process in Burstcoin mining:

Note:  A plot file only contains raw data and there are no headers.  All information needed for a user and miner is set in the filenames. The formatting of the filename is as follows.

Note:  each subsequent hash number will decrease by 1 until the final hash number of 0 is reached. 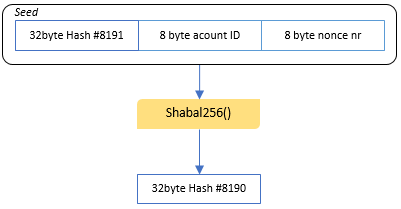 Continue prepending each result to the previous seed and running the calculation until 128 iterations are completed. After the 128th iteration, resulting seeds will exceed 4,096 bytes. For all remaining iterations, use only the last 4,096 bytes. Use the final hash to XOR all other hashes individually:

The XOR logical operator compares the 1st byte from each hash and outputs a ‘1’ if the bytes match, or a ‘0’ if the bytes do not match.  The operation is performed for each byte position. When complete, the newly created nonce is stored in a plot file and the process for generating a nonce repeats. Each subsequent nonce generated is added to the plot file. The number of nonces that can be included in a plot file is limited only by the capacity of the storage medium.

The process for creating nonces described until this point encapsulates what is known as the POC1 format.  In order to address a largely theoretical “time-memory tradeoff” vulnerability with POC1, POC2 was created.  The process for creating the POC2 follows the POC1 format, but a final step is added which reorganizes the data.  In this final step, the nonce is divided into 2 halves (scoop numbers 0 – 2047 and scoop numbers  2048 – 4095).  The data in the 2nd half of each scoop in the lower numbers is swapped for the data 1st half of each scoop in higher numbers.  The mirror scoop is calculated as 4095 – CurrentScoop.

When complete, the newly created nonce is stored in a plot file and the process for generating a nonce repeats. Each subsequent nonce generated is added to the plot file. The number of that can be included in a plot file is limited only by the capacity of the storage medium.

Mining software reads from one or more plot files.  A file is opened, a scoop is located, and the data from the scoop is read.  If the plot file is not optimized for this process, the scoop locations will be in more than one location. In the example to the right, the mining software is looking for scoop #403.  As shown in the example, the continuity of scoop #403 is interrupted by scoop #403.

Previously the situation was optimized remedially with a second program designed specifically to optimize the plot files by regrouping the data so that all of the data for each scoop was grouped together. Recent developments in plotting software now allow for the creation of plot files that are optomized automatically at the time that they are written to a storage disk.

Previously the situation was optimized remedially with a second program designed specifically to optimize the plot files by regrouping the data so that all of the data for each scoop was grouped together. Recent developments in plotting software now allow for the creation of plot files that are optomized automatically at the time that they are written to a storage disk.